Why Word Crafters Should Learn the Difference Between Grammar, Mechanics, and Style


Writers tend to instinctively sense that grammar, mechanics, and style are important. But what are they, really? How are they distinct from each other? Do they overlap? And do they actually matter, or are they just terms that writing experts throw around to sound fancy?

To answer that last question, I’ll ask another: How do you feel about the screws that attach your kitchen cabinets to the wall? What about the hinges that secure the doors to the cabinets? You probably don’t give the hardware much thought, but what if it wasn’t there? If the cabinets were glued together, you’d constantly have the awful feeling hanging over you (literally) that everything might fall on your head when you open a cupboard to grab a snack.

Writing is like building a cabinet. The project involves many different pieces, a blueprint, and options for beautifying and customizing the cabinet once it’s assembled. Grammar, mechanics, and style are the tools and materials for constructing your verbal cabinet. And, fortunately, there are even guidelines for when and how to utilize those tools as you write.

Preparing and Assembling the Pieces: Mechanics

A knowledge of mechanics tells you how to cut and assemble the pieces so you end up with a cabinet and not a hodgepodge of nonsense. It’s the art of writing well at the sentence level. This can be as general as writing clearly and concisely or structuring a sentence overall. More specifically, mechanics addresses how to combine parts of speech, modifiers, phrases, clauses, transitions, etc.

Mechanics differs from grammar because it deals with the big picture of language structure rather than the detailed rules of its use. For example, word order falls under the realm of mechanics. In English, we position adjectives before the noun they describe (“a red house”) instead of after (“a house red”) as with Spanish and French. Furthermore, people often view misplaced modifiers as a grammar faux pas, but they are more accurately classified as flawed mechanics. One of the most famous misplaced modifiers is credited to Groucho Marx, an American radio and television comedian who said, “One morning I shot an elephant in my pajamas. How he got into my pajamas I’ll never know.” The first sentence contains the right information, but the meaning is obscured by the word order, which could be adjusted thus: “One morning I shot an elephant while wearing my pajamas.”

When you consider mechanics at this micro level, it also begins to overlap with grammar, the set of rules that governs fastening all the pieces together.

Grammar is the hardware that holds the cabinet together so it functions as intended and people comprehend how to use it. The goal of having a grammatical system is to communicate with clarity and consistency. It provides a standard procedure for handling the parts of speech (articles, verb tense, subject-verb agreement, prepositions, etc.).

Grammar also encompasses punctuation, which is typically considered a separate subset due to the flexibility it offers. Some rules, such as comma placement, are unbreakable, but punctuation also depends heavily on the intended meaning of the sentence. It acts as body language and nonverbal cues, indicating timing, tone, and inflection. Through a generous number of em dashes, Jane Austen wove sidetracks and fractions of thought into a single, long sentence. Eleanor H. Porter used ellipses to show when a character’s dialogue trailed off, followed by an exclamation point or question mark to convey the mood. Though unique punctuation usage has the potential to offend modern grammatical sensibilities, it illustrates how even grammar can be personalized within reason. In this way, grammar (especially punctuation) overlaps with style.

The style of a cabinet is how it looks (color, stain/paint, type of handles, traditional/modern, etc.). Similarly, the style of writing is how it sounds. Does a Dickens novel sound familiar and rambling? Do Hemingway’s stories sound matter-of-fact? Do Austen’s novels sound flowery and utterly proper, yet still down-to-earth and relatable? All these impressions readers can form are facilitated by writing style.

Style accounts for the gray areas that grammar and mechanics don’t cover, like when passive voice is permissible and when second person is a bad idea because of your audience and purpose. It is based on a number of factors, such as the individual author, the audience, and/or editorial policies at a publication (which are designed to encourage a coherent style publication-wide).

As with many other facets of writing, when developing your style, you need to recognize that with great freedom comes great responsibility. Style is not deciding that learning the rules is unimportant, nor is it arbitrarily ignoring the rules. Keyword: “arbitrarily.”

Consider E. E. Cummings, who did not capitalize his name in print, and based on a cursory reading of his poetry, he appears to have been allergic to conventional English. Note that he graduated from Harvard and then proceeded to become famous for being an extreme nonconformist where English conventions are concerned.

Following the Blueprint: Applying It All to Your Writing

Even when you know the definition of mechanics, grammar, and style, mastering how to use them can be overwhelming. Sometimes writers internalize the importance of precise grammar and fret about whether their punctuation is correct as they’re typing a first draft. Or maybe they realize they haven’t been writing for their target readership as well as they should, and they become hyper-focused on the connotations of this or that word before they finish a sentence.

This is where the concept of Higher Order Concerns (HOCs) and Lower Order Concerns (LOCs) becomes invaluable. Basically, it’s the same concept that tells you it would be senseless to attach the hinges to your cabinet before you trim the wood to size. So how do you distinguish between HOCs and LOCs? Here’s a general breakdown:

Higher Order Concerns include issues with plot and scene structure, content quality, theme, characters, and style choice. Style as an HOC involves pinpointing your audience and purpose, which will guide you throughout the writing process.

LOCs are no less essential than HOCs—they should simply be addressed after HOCs. Like attaching hinges before cutting your wood pieces, checking for errors at the sentence level (such as punctuation or verb agreement, which are LOCs) is impractical when large chunks of your story still need drastically altered to communicate the theme (an HOC) more clearly.

With this in mind, the writing process becomes much more methodical and manageable. Writing the first draft is always the top priority, because a story on paper is worth two in the brain. Then you can move on to repairing major problems—HOCs like plot holes, lack of focus, undeveloped theme, and weak characters. After this first round of revisions, you should have a fleshed-out, coherent story to work with, one that you are reasonably confident won’t need any more large-scale changes. This is when you can begin fine-tuning LOCs like grammar, punctuation, word choice, and tone.

Word Crafting: Why It Matters

The Bible says that Jesus was a carpenter (Mark 6:1–3) like his father Joseph (Matthew 13:54–55). I imagine He probably learned wood crafting from Joseph as a boy and helped to support His family with that skill.

What if He had built a chair that collapsed when its new owner sat on it because He didn’t want to bother with fitting the pieces together snugly? Cutting the wood perfectly was the main thing, right? He could have built it with the wonderful intention of kneeling before the new owner to wash his feet and minister to him, but by then the chair would already have been broken, the damage done, and the opportunity lost.

Our word crafting is the same way. Of course, we always have second chances to make a good impression and share the faith, or even a smile. But isn’t it better to build a good message the first time around? In his letter to the Colossians, Paul admonishes us, “Whatever you do in word or deed…do your work heartily, as for the Lord rather than for men” (Colossians 3:17, 23, emphasis added). The literal translation of the phrase “do your work heartily” is “do your work from the soul.”

What does it mean to write from the soul? Metaphorically, it means constructing a solid cabinet that readers are able to open, one that won’t crash onto their heads because we neglected to tighten a loose sentence or sharpen a vague thought. Above all, it means remembering that every time we pull out our tools and start word crafting, we do it all for our Lord, the carpenter. 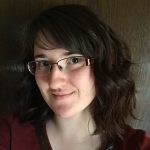 Rachel Rogers is an enthusiastic, easily distracted wordsmith who never has time for everything she wants to do. She’s been writing for over 15 years, holds an A.A. in Liberal Studies (emphasis in English and Communications), and has been published in the magazine Practical Homeschooling and the literary journal at her college. As an English tutor, she uses an imaginative perspective and the Socratic method to help writers with every step of the creative process for both fiction and nonfiction.

Her next goals are to publish a volume of her poetry and write the world’s best adventure series featuring squirrel protagonists. When she isn’t writing or studying, she’s probably sniffing books or squirreling away an unwarranted number of notebooks and colored pens.

Take Your Style to the Next Level

The written word matters to God.

Does it matter to you?

Learn how to develop an eloquent, practical, and personal style by downloading our free e-book.