A plot may stimulate readers’ minds, but even the most unforeseen twists won’t linger in their memory unless the events are deeply rooted in the characters’ lives. Strong character development engages readers’ emotions, giving them someone to invest in and identify with. It’s a crucial component of fiction, but the execution looks starkly different in a plot-driven story than in a character-driven one. By comparing the two styles, writers can learn how to capitalize on the one that best serves their work-in-progress.

If you’re a Marvel fan, you’ve had the chance to see dozens of superhero movies over the past ten years. Making a universal judgment about the quality of the films would be unfair (some are far superior to others), but the franchise has trends that are fair game to point out. One is how it tackles character development.

Superheroes typically undergo simple growth arcs. Spiderman gradually embraces the responsibility that comes with his powers. Iron Man faces the consequences for manufacturing weapons and dedicates himself to undoing them. Thor discovers what being worthy means. The defining movie for each hero contains a clear growth arc.

These arcs usually progress in stages during the first two acts. By the time the third act begins, the character has matured, enabling him to avert the impending disaster. Even The Avengers, which juggles multiple characters simultaneously, follows this pattern.

Character development in these stories can easily become a tool to advance the plot rather than the heartbeat that makes readers care about the outcome. We often sense this as viewers and leave feeling like the story was formulaic and shallow. Superhero movies are the fairy tales of our modern age—plot-driven and uncomplicated, with an obvious theme.

On the other end of the spectrum, the novels of Russian author Leo Tolstoy handle character development completely differently. His characters experience every kind of arc imaginable, including several small arcs over the course of a single (though lengthy) novel.

In War and Peace, Pierre Bezukhov’s search for meaning brings him to moral deconstruction—until he finds answers beside someone who is a stabilizing influence for him. Unlike a Marvel hero’s character arc (which is usually related to skill or ability), his character development is intensely personal.

In Anna Karenina, the title character has a negative arc: devotion to her personal dogma (love over duty) gradually tears apart her connections to her husband, family, society, and in the end, life itself. Tolstoy portrays her decline with remarkable perception, again delving deeply into the inner psychology of each phase.

Both of the books I’ve mentioned feature a dynamic cast of characters with arcs that are correspondingly profound. Tolstoy is a master at throwing characters into an intricate web of relationships, societal expectations, and personal convictions. Character-driven novels are his hallmark. The plots are nothing but the sum of the characters’ decisions.

In the area of character development, Tolstoy represents the polar opposite of Marvel. The arcs are complex and messy rather than simple and relatively uniform. The themes need teased to the surface instead of being spelled out. And the narrative sits so close to the inner self (as opposed to mere external virtue) that it feels almost biographical. Readers must sift through the connotations of every choice the character makes.

If superhero stories are modern fairy tales that showcase generic themes, Tolstoy’s novels are mirrors that reflect deep truths about ourselves.

The Pros and Cons

I love superhero movies and Russian novels. They scratch different itches as a viewer/reader, and when crafted well, both are able to move me outside of myself to appreciate truth and beauty in fresh ways. Now that I’ve described how the two strategies are unique, I’ll examine the strengths and weaknesses of each.

The Strengths of Both Approaches

1. The characters in superhero movies are easy to understand. Simple stories are not the same as bad stories, and a vividly depicted axiom can be refreshing. Captain America embodies nobility, which sets him above self-preservation. Yet his repeated sacrifices are no less inspiring because of that.

2. The themes in superhero movies are hard to miss. Spiderman’s theme, “with great power comes great responsibility,” hits the audience in the face. But for all its lack of subtlety, it’s a truth every human being wrestles with. Likewise, Iron Man’s past and present mistakes constantly haunt him, so he devotes his energy to cultivating more happiness than sorrow. He eventually achieves his goal, putting his innate drive to rest. And we all admire him for it.

3. Tolstoy’s novels force us to evaluate ourselves. Where can we find meaning? What does a virtuous life look like? Everyone has meditated (or should meditate) on these kind of questions, and we have the opportunity to discover and test various answers alongside Tolstoy’s characters.

4. Tolstoy’s novels have a myriad of thematic implications. If readers are willing to put in the legwork to thoroughly explore each story, they’ll recognize that the wide cast of characters and situations are rich with insight about human nature, the sources of meaning and happiness, and more.

The Weaknesses of Both Approaches

1. Superhero movies tend to present a simplified version of humanity. Due to the fast-paced expectations of the genre, character motivations are rarely complex. Whether intentionally or not, character development becomes subservient to the plot. As colorful and interesting as the characters may be, any transformation they experience is exclusively for the purpose of moving the plot to the third act and climax.

2. Tolstoy’s novels demand a lot of time and intellectual energy. The themes are challenging to decipher at first, second, and even third glance. In addition, they deal frankly with mature subjects that require discernment to wade through. The stories can be intimidating, and they certainly aren’t for everyone.

Panning for Gold: Why This Matters to Writers

After all this discussion and analysis, your mind may be boggled. But the most important takeaway is that you can now identify the major differences between plot-driven and character-driven stories. You can then pinpoint where your own fall on the spectrum.

The better you know yourself as a writer, the more intentional you can be in crafting your stories. Lean heavily into the strengths of the method you gravitate toward, and strive to avoid the weaknesses you’re prone to.

Whether simple or complex, plot-driven or character-driven, masterful stories influence readers for centuries. Don’t lose yourself in searching for the best story ever—but do lose yourself in writing the stories that are true to you, your characters, and the standard by which we judge all things: God Himself. 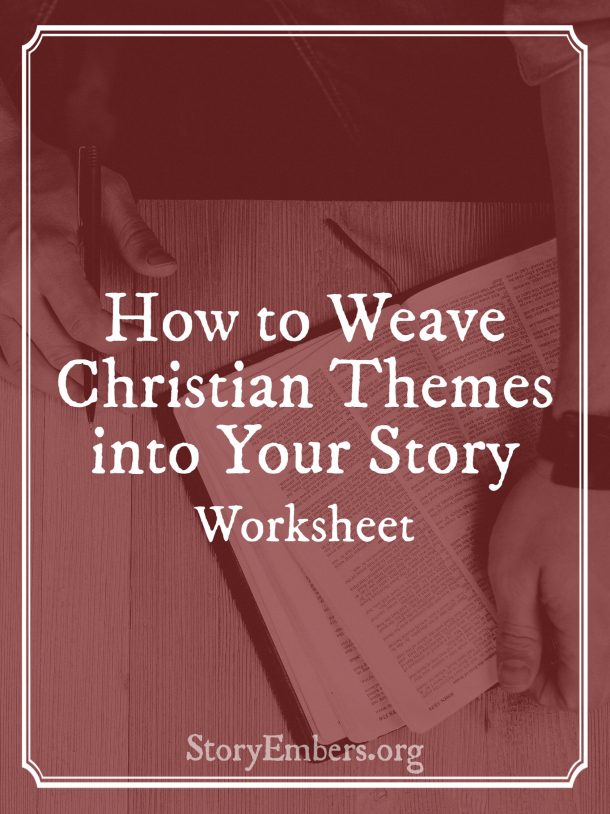 Don't Be That Kind of Christian Writer

Want to impact the world for Christ with your writing—without being preachy or cliched?

Learn how to avoid common pitfalls and craft powerful themes by downloading our free worksheet!

Congratulations! Redirecting you to the theme worksheet in one moment...