The Lessons 6 Years of Blogging Taught Me about Writing Fiction
 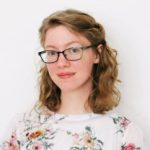 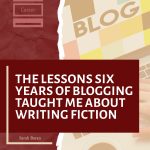 When I joined the writing community as a teenager, my peers insisted that I launch a blog to build a following (or else I’d doom myself to obscurity). Running with this misguided notion, I opened a WordPress account and fired off the world’s most random introduction post.

To be clear, I’m not here to ram a sales pitch for blogging. Blogs aren’t as necessary to marketing as I originally believed, especially since social media and email newsletters offer more versatility. But in the six years I’ve spent maintaining a personal blog, I’ve developed a broader view of why I write fiction and who I’m trying to reach, as well as habits and skills that aid me in my pursuit of authorship.

Even if you’d balk at the idea of broadcasting your daily activities on the internet, the four principles I’m going to discuss apply to multiple areas of writing, not just blogs. So you can relax and look for outlets to gain the same benefits from your own routine.

1. Anything Can Be Turned into an Engaging Scene

With a personal blog, I don’t have the option to couch my non-magical existence in epic quests and improbable love triangles. All I have is the raw material God provides—my family, my job as a librarian, my penchant for public disaster—and a surplus of words. Does the fact that I’ve never ridden a dragon mean I’m a bore? Hardly!

Blogging trained me to translate my experiences into snippets that readers would enjoy. Because fiction is a mirror of reality, not a window for escapism, writing nonfiction is directly linked to writing fiction. The adventure God is taking me on might involve more social awkwardness than superhuman abilities, but making the mundane seem compelling is a critical aspect of writing fiction, regardless of genre. If you can’t describe your own backyard vividly enough for readers to smell the freshly cut grass and trip over the toy trucks your brother scattered all over, how will you transport them to a mythical location?

The exercise I’m recommending is actually a hybrid form of writing called creative nonfiction. Savannah, a previous writing team member, submitted an entire article explaining what it is and the advantages of experimenting with it. “Stories are in our heads,” she says, “and sometimes we struggle to transfer them to paper. Since we’re making everything up, we have to fill each scene with details so that readers can visualize what’s happening. But with creative nonfiction, we don’t need to rely on our imaginations.”

You can practice as easily as picking apart the individual moments in your morning—including the tension of hurriedly mixing and then ruining a batch of cookies you were supposed to feed to guests. You can use metaphors to convey the quirks of your house, your grandparents, and the dilapidated shed at the end of your street. Or you can analyze conversations and identify plot points in the mishaps at work.

Several years ago, I wrote a 1,500-word blog post about singing a special for my graduation ceremony despite being tone deaf. At the time, my performance was mortifying. But the situation presented the opportunity to share an amusing memory, and it became one of my most popular posts.

Whether you’re reviewing feedback from an editor, entering a short story contest, or waiting to hear from beta readers, subjecting your writing to scrutiny can feel like jumping from a twenty-story rooftop and hoping you don’t break a bone—or your entire skeleton. When you’ve hitherto been anonymous, the sudden visibility can be uncomfortable. Many beginning writers struggle with a phobia of showing others their work. What if a publisher rejects it? Or readers complain?

Although Story Embers was my first foray into the publishing industry at large (and nerve-wracking in many respects), I never faced the paralyzing terror of sending my fledgling words to their possible death. Why? Because I’d been catapulting off the twenty-story building in a personal context long beforehand. My blog initially had five followers total (two were my siblings and one was my mom). The low-stakes environment eased my anxiety and prepared me for the eventual pressure of a growing audience, their expectations, and the looming threat of nasty comments.

Seeking exposure and input from others is essential to your success. But you aren’t obligated to approach the biggest publisher you know as soon as you finish a project and risk crushing your hopes. Instead, ask close writing partners, trusted friends, or even your mom to look at your draft. Join a critique group. Submit pieces to smaller magazines and websites. Plunging your words into a free-fall will never completely lose the cringe factor, but with enough practice, the jolt of landing on your feet diminishes.

If you intend to treat writing as a career, you’ll need to brace yourself to meet the iron will of deadlines. Marketing schedules, revision due dates, publishers who request a new manuscript by the end of the year—you name it. Deadlines are cruel tyrants who don’t care how much inspiration and enthusiasm (or lack thereof) you feel. They demand results now.

While blogging is inherently more merciful—I’m my own boss and therefore can set my own pace—the responsibility of entertaining my regular visitors forced me to churn out weekly posts even when the flame of inspiration wavered. I was no longer locked away in my childhood bedroom, scribbling journal entries to myself. People were watching. They would notice if I broke my posting pattern, and the consequences might be too brutal to endure. Like them judging me.

Fast-forward several years to when I received my first taste of professional deadlines. I was already acquainted with the process of turning in an assignment because I had to, regardless of my emotional state—a habit that carried over to my fiction writing. Completing a daily quotient became second nature because I wasn’t battling my whims whenever I sat down.

Writing consistently requires discipline. But you can reduce the learning curve by choosing a specific time to write each day, setting manageable goals, and finding someone to yell at you when you procrastinate. Never underestimate the power of accountability. It will give you extra shots of adrenaline to push through chapter after chapter.

4. Connections Are More Valuable Than Numbers

If the definition of success is mass book sales, hundreds of fans squealing in adoration, and a spot on the New York Times bestseller list, I’m a failure. But I’ve discovered a treasure I never would have thought possible: a quiet group of people who return week after week, month after month, and respond to my content. They may not be a legion, but I’m writing to touch hearts, and loyalty will drive me deeper into their lives than page views and like counts.

A surefire formula for accumulating a reader base doesn’t exist. Every opinion on the topic differs, and every strategy holds pros and cons. However, regardless of your platform or method, before readers will invest in you, you must first invest in them.

Healthy relationships thrive on honesty about what you believe and who you are as a person (the genuine version, not a collection of carefully photoshopped images). My blog brand revolves around sarcasm, but occasionally I’ll insert a serious post—which always provokes the same confession from readers: “I started following you for the humor, but I stayed because your ideals resonate with me.”

Humans are communal creatures. We yearn to belong, to bond with the people we interact with. And that extends to the books we consume, which are outpourings of someone’s soul. Aim for excellence, but don’t limit your efforts to your craft. Reply to readers’ comments and emails. Appreciate their attention as much as you want your stories to be appreciated. Be vulnerable and brave.

The market is full of talent, and at any flick of a page you could be dethroned from the seat of favorite author. But you rarely abandon people you relate to and consider your friends. Likewise, the authors I admire for their personalities and values, not just their finesse with literary devices, I’ll stick with to the end.

When I hammered out my introduction post for my meager five followers, I had visions of grandeur. I assumed my blog would immediately top the charts (it didn’t) and I would be famous within the year (I’m not). Like most newbie bloggers, I had no clue what I was doing. Unlike most, I persevered despite the absence of genuflecting fans and relished the endeavor for different reasons.

However, you can experience the same triumphs without going to the trouble of renting an internet cubby. The ability to recognize the stories playing out around you, and flexing your creativity when you relay those observations, will enhance your voice—even if you’re writing for an audience the size of a speck.

Sarah Baran views herself as fiercely intimidating, but anyone who’s seen her trip over her own shoelaces knows the truth. She’s a paradox disguised in human form, a purveyor of caustic wit, a reluctant people-lover, and an idealistic cynic who sees the world through cracks in her rose-colored glasses. A love for writing grabbed her in a stranglehold when she was only a child, so she decided to give storytelling a whirl. If she’d known this decision would lead to an unhealthy obsession with daggers and many sleepless nights agonizing over finding the perfect words to describe a tree, she might have opted for a safer career choice. Regardless, she’s never looked back.

When she isn’t writing, Sarah dons the role of grouchy librarian and glares at children over the rims of her glasses. You can find her having a good time at humanity’s expense on her blog, TheSarcasticElf.com.

That’s why we created a worksheet that will help you make sure your story hits all the right plot beats.

Sign up below to learn how to ace story structure.

Congratulations! Redirecting you to the plot sheet in one moment...